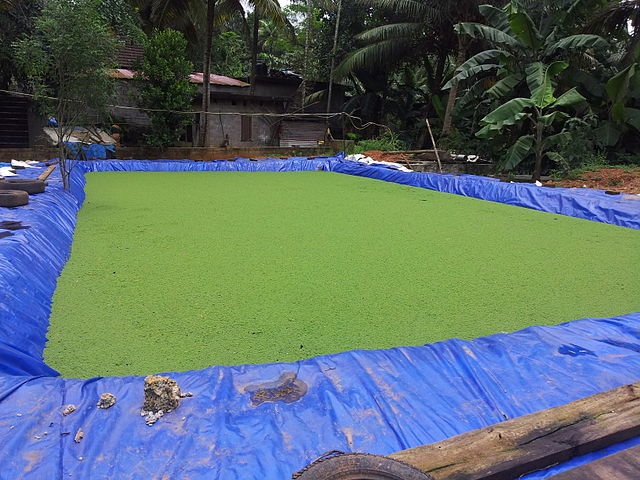 Azolla is a floating water fern that has roots submerged in the water. Amusing to look at, this fodder plant has been gaining quite a lot of popularity and is quite in demand. It resembles the likes of duckweed or some type of mosses. Since Azolla is a very productive plant, let us see how they are cultivated in India.

The Azolla plant has many benefits. Azolla cultivation can be of so much use to not only famers, but consumers as well.

Let us look at some growth factors and requirements for azolla farming in India.

This refers to the pH levels required in order to have the ideal azolla plantation. Azollas are known to be able to survive within the pH ranges of 3.5 to about 10. These plants are not able to grow in acidic soils with pH levels below 3.5. So, within that limit or above should be fine.

Azolla is a very tolerant plant. It is known to be able to tolerate various ranges when it comes to temperature. Some species of azolla are known to even survive in temperatures as low as – 5oC which is quite impressive. Most species have the ideal temperature of 18-28. However, it can go higher for some rare species.

Light affects the photosynthesis and regulates the nitrogenase activity in Azolla. Azolla plants are best known to grow under less sunlight instead of extreme sources. Under high sunlight intensities Azolla fronds turn brick red. In the case of low light intensities, these sources of light could cause the Azolla plant to suffer or die.

The ideal photoperiod for azolla plants is about 20 hours. For the 20 hours photoperiod, 380E/m2/s of illumination should be fine.

Just like the cultivation of any other plant, the azolla requires just as many mineral and nutrients for its growth. The nutrients required might be available to the plant in the water or it can be extracted from the soil if the water is shallow enough. Also, molybdenum and cobalt are important minerals to have. These are required for Anabaena and its nitrogen fixation.

This is the most important nutrient for azolla production. A deficiency in phosphorus can be determined by the deep red color of the plant and the sudden lengthening of the roots.

As you may know, the azolla is an aquatic plant which means that it requires a shallow pond for its cultivation. We shall be discussing the process behind the cultivation of azolla plants.

A lot of care and consideration must be put when it comes to growing azolla. Firstly, choosing a location for the azolla pond is crucial. This particular location must be perfect and must abide to all the factors required. For example, having a good source of water is important. Partial sunlight and enough shade should also be present at the place of cultivation. Make sure the bottom of the pond is free from any obstructions as well. When it comes to the size of the pond, it depends on how much of azolla you’re looking to cultivate. Make sure to have the pond cleaned and levelled before beginning the growing process. Line up the edges of the pond with bricks. Lastly, make sure to place a net on top so as to prevent any unwanted things from falling into the pond.

The cultivation of plants in India all have different methods. The same goes for the cultivation of the azolla plant. You can start by using a mixture of fertile soil, cow dung and water. Spread this mixture across the pond. Make sure this is executed well as it is the foundation step in the cultivating process. The water should be about 5-6 inches in depth. You can use azolla culture and spread it across as well. About 1kg of this should be enough for the average sized pond. Apart from this, do not forget to check the water for alkaline levels. For its maintenance after the briefing of cultivation, use 1 kg of cow dung and about 100 grams of super phosphate to the plant once every two weeks or so.

After the foundation process, the azolla plant should be ready after two or three weeks. Plastic sieves are usually used to harvest the azolla and can be done daily when fully grown. Like we said earlier, azolla acts as fodder for many livestock. So, it can be fed either directly or mixed with other nutrients. However, make sure to clean the plant well before utilising.

There you have it, the A to Z of azolla cultivation in India.

10 Advantages And Disadvantages Of Organic Farming In India